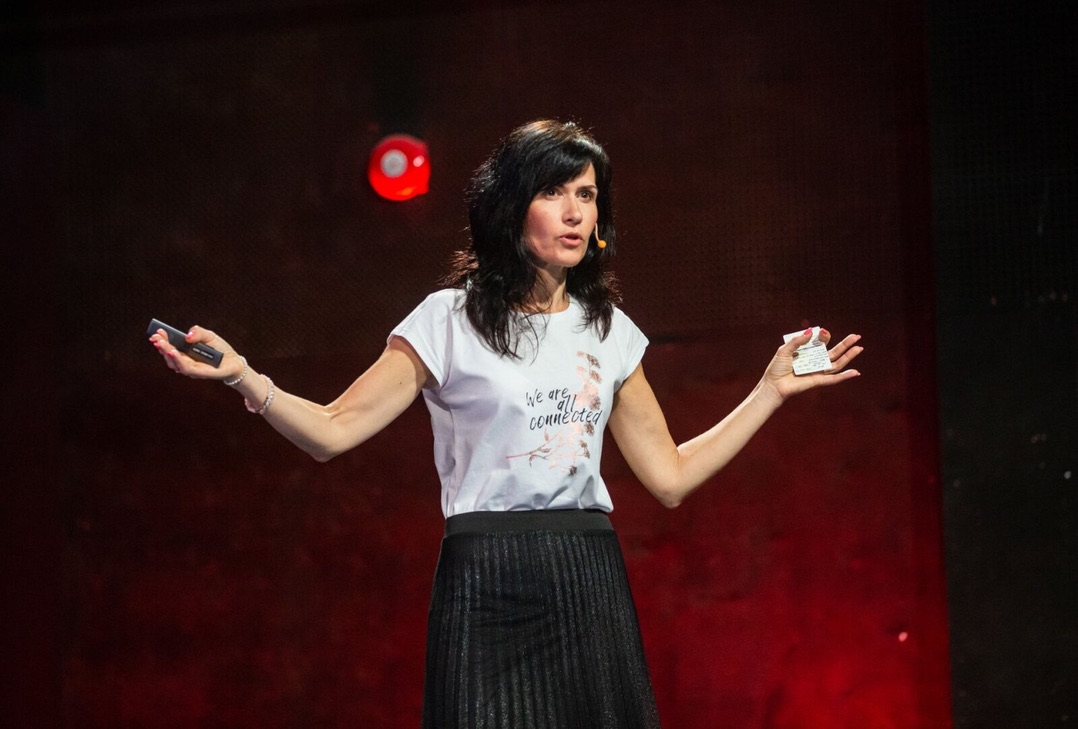 At coaching conference 2021, I spoke about coaching supervision and its benefits to coaches and clients.

The manifesto for coaching supervision published by Henley Business School and the Association for Coaching, summarises well what coaching supervision is. The authors of the manifesto believe that ‘having supervision is a fundamental part of continuing personal and professional development for coaches, mentors, consultants and psychologists. It provides a disciplined space in which the supervisee can reflect on particular work and client situations and relationships, and on the reactivity and patterns they evoke in the mind. The process of transforming these in supervision can profoundly benefit the client, their organisation and their own professional practice.’ (https://www.henley.ac.uk/news/2019/the-manifesto-for-coaching-supervision)

I also shared some stories which you can read here: 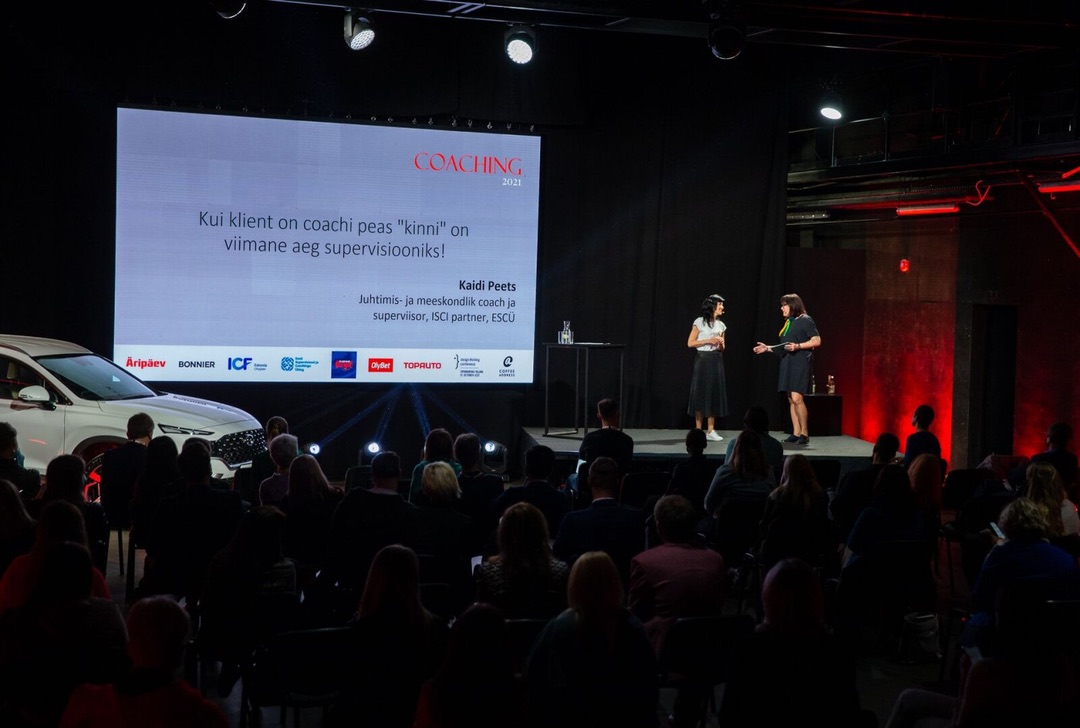 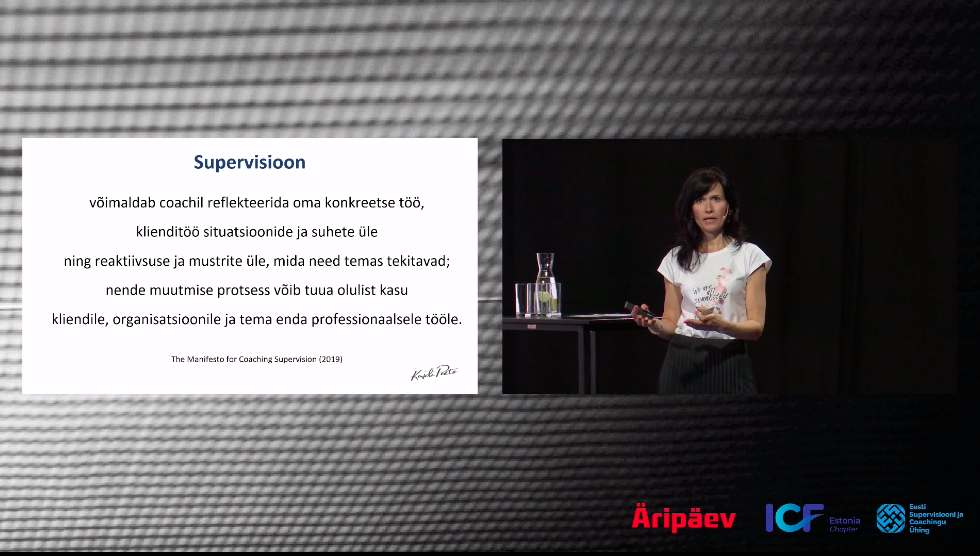 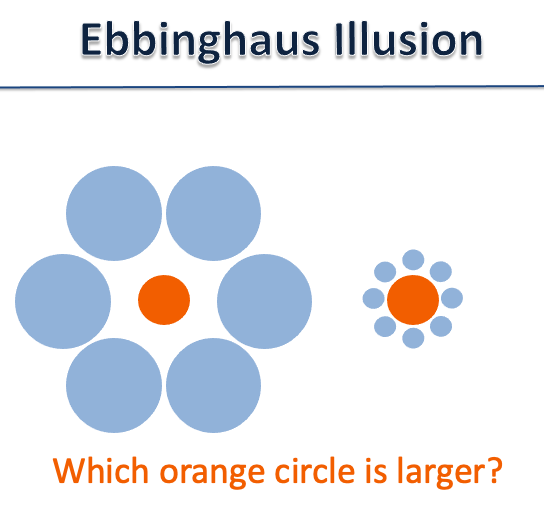 In the programme ‘The Science of Well-Being’, Laurie Santos from Yale University illustrates with the help of Ebbinghaus Illusion how our perception about happiness can be influenced by who we judge ourselves against.

In the Ebbinghaus Illusion, the orange surrounded by larger circles seems smaller than the one on the right surrounded by smaller circles despite the fact that both orange circles are exactly the same size.

We tend to make social comparisons, compare ourselves against other people. For example, if you live in a 100 m2 apartment and you are surrounded mostly by people who live in an apartment or house significantly larger than yours, you may feel dissatisfied with your apartment. Yet, if you are surrounded by people living in a flat significantly smaller than yours (e.g. 40m2), you may feel more satisfied with your house and maybe your life in general.

It’s illogical. The absolute or true size of the apartment doesn’t change, but our own and others’ perception may change depending on the context or reference point, i.e. a point to which we are judging something. And that may influence our perception of satisfaction and happiness in general. 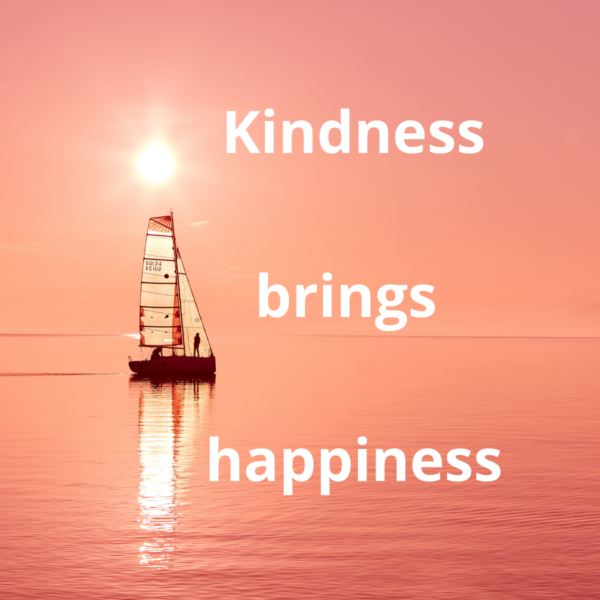 There is lots of empirical evidence suggesting that simple acts of kindness bring us happiness.

For example, researcher Otake et al. performed a study where participants were asked to keep track of every act of kindness they performed toward other people every day for one week. The study revealed that one’s sense of happiness is increased significantly by simply counting one’s own acts of kindness.

Orly Wahba founded of  Life Vest Inside with the goal to empower and unite through the power of kindness. Through Life Vest Inside, Orly encourages people to embrace the incredible power of giving and recognize that in times of hardship, kindness, like a life vest, keeps the world afloat. Orly’s award-winning short film Kindness Boomerang has been viewed more than 30 million times and it shares a simple message: kindness is contagious. 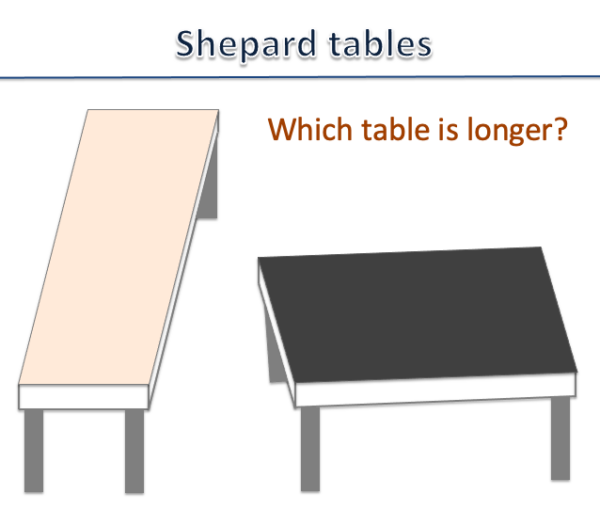 Which table is longer? They are identical. See the video below. Although there are several videos about Shepard tables illusion, I made the video together with my son because we wanted to have fun together and experience how the experiment works.

How to explain the illusion? According to Roger N. Shepard, we are commonly fooled by our depth perception. Researchers at New York University explained that humans tend to ‘interpret a drawing or image as a three-dimensional object’, rather than for what it really is. As we live in a 3D world, we automatically convert 2D objects on a page into a 3D interpretation.

We live on autopilot, our brains like to simply and generalise. Often we don’t pause to question our assumptions and thoughts. Just like we automatically misinterpret the context of the tables and therefore see the identical tabletops to be different in size, we can perceive things incorrectly and make wrong conclusions in other contexts as well.

For example, we may transfer our feelings, attitudes and behaviours from the past onto present relationships. This is often an unconscious process and can happen in various settings, e.g.:

According to Shepard, “any knowledge or understanding of the illusion we may gain at the intellectual level remains virtually powerless to diminish the magnitude of the illusion.” The same applies to transference. Even if we know and understand what transference, countertransference and projection are, we may easily experience them without being aware of it.

It’s not only professionals working with people, such as psychologists, coaches, supervisors etc, who should be aware of such processes, it’s also leaders who should develop awareness and skills to manage transference, countertransference, projection and other psychological processes. 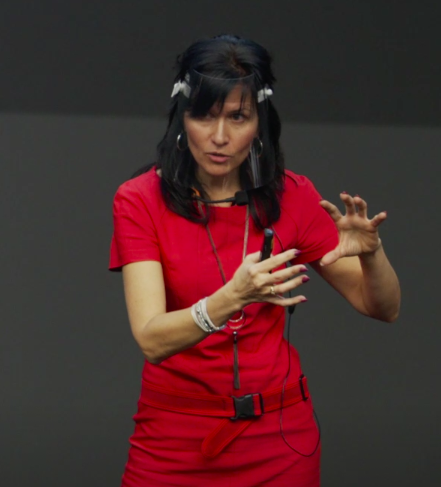 It was in 2006 when I discovered the famous Steve Jobs’ Stanford commencement address that had a huge impact on my life. Back then I didn’t know that Steve wasn’t the kind of leader I believe great leaders should be, but he sure had courage to follow his heart and intuition. Some of my favourite quotes from the speech:

‘Death is very likely the single best invention of Life. It is Life’s change agent. It clears out the old to make way for the new. Right now the new is you, but someday not too long from now, you will gradually become the old and be cleared away. Sorry to be so dramatic, but it is quite true. Your time is limited, so don’t waste it living someone else’s life. Don’t be trapped by dogma — which is living with the results of other people’s thinking. Don’t let the noise of others’ opinions drown out your own inner voice. And most important, have the courage to follow your heart and intuition. They somehow already know what you truly want to become.’

‘You can’t connect the dots looking forward; you can only connect them looking backward. So you have to trust that the dots will somehow connect in your future.’

Inspired by the commencement address and a Harvard University programme I attended years ago, together with Kairi Kuuskor from Bold Tuesday we delivered a practical seminar at Estonian Art Academy. The seminar was called ‘Courage to create one’s future’ and focused on two topics:

We shared our own personal dots and pivots from the past and invited the big hall of students and lecturers to do so.

We used Bold Tuesday Vision Board Reimagined as a basis for our seminar.

Special thanks to EKA and Robert Luig for video and technical support! 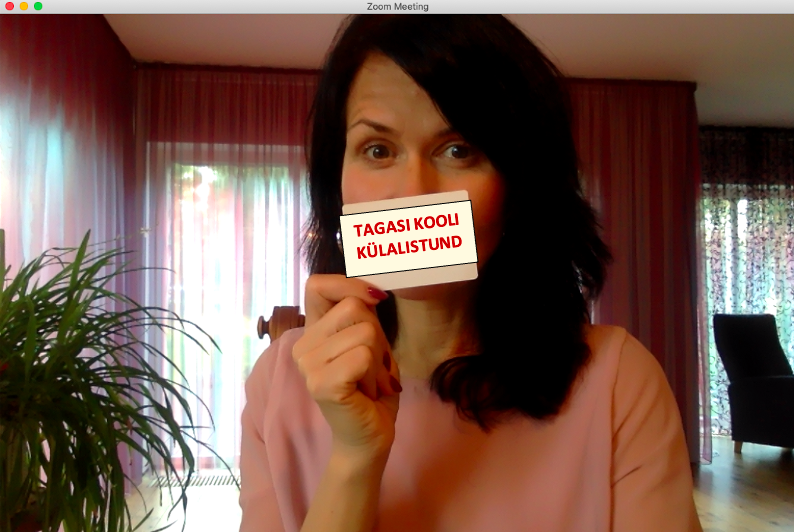 Initiative ‘Back to School’

November 6th, 2020 Posted by Kaidi Eesmärgid 0 thoughts on “Initiative ‘Back to School’”

Back to School is great initiative, which inspires cooperation between schools and organisations and helps to connect schools with people who wish to contribute to education.

I have delivered various classes at different schools all over Estonia. Today I delivered a virtual class to students of Kohila Mõisakool about the importance and skills of collaboration. In my work as a team coach and supervisor, collaboration is something we often focus on with executives and teams in coaching as well.

What are the topics that inspire you? Schools are happy to collaborate with people from different fields of life who share their skills, knowledge and experience that help students learn something useful for their future.

Some of my previous experiences from schools: 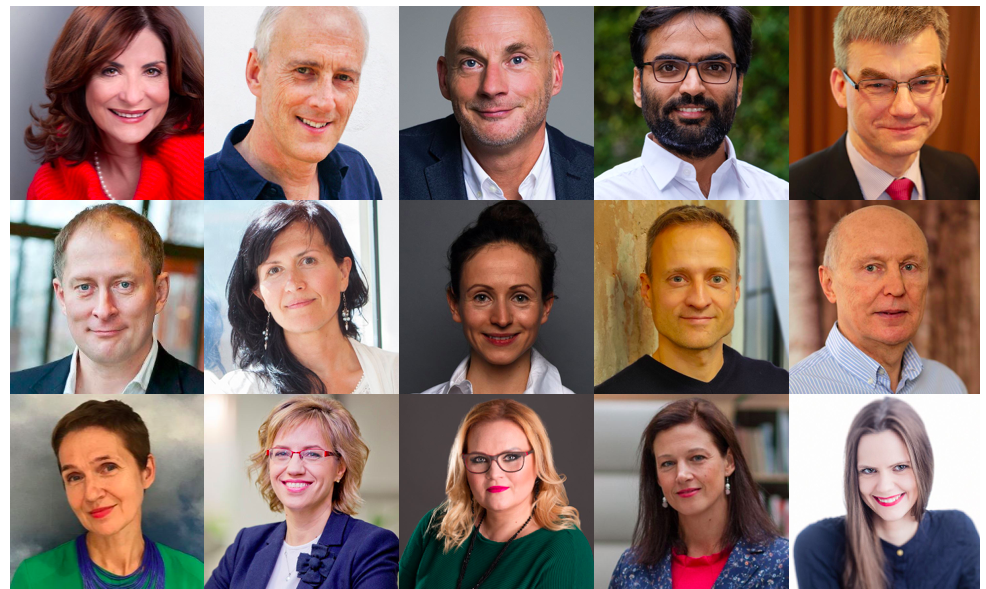 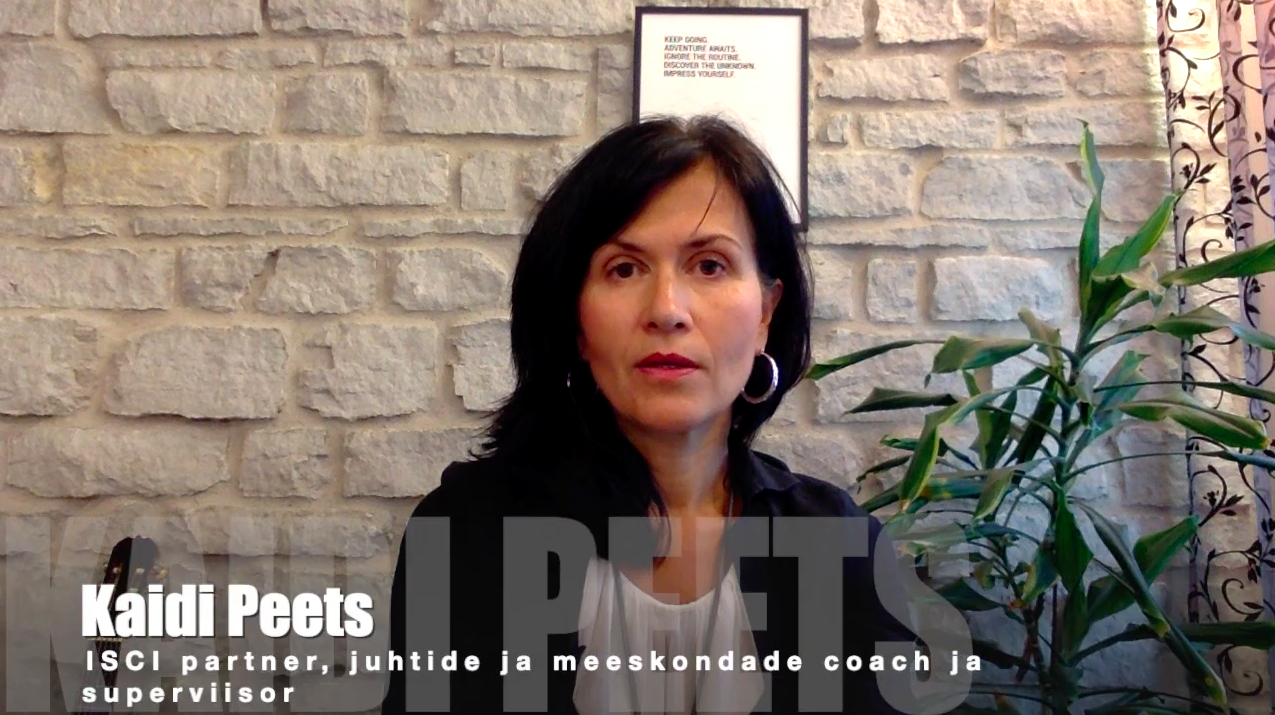 This video is in Estonian. 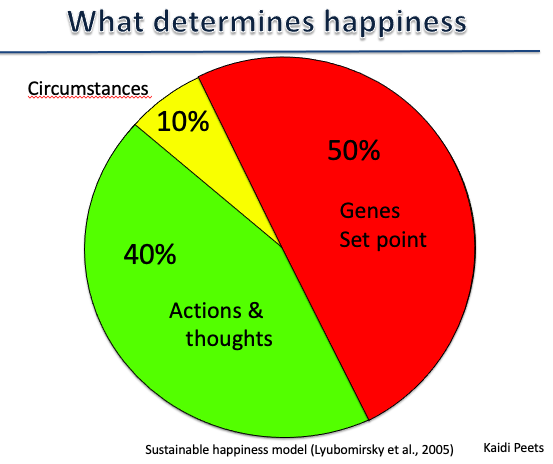 Lyubomirsky, Sheldon et al. (2005) suggested that there is considerable potential for people to take action to influence their own happiness. If happiness is not fully determined by a person’s genetics and circumstances, then there must be something left over for intentional behavior. The Sustainable Happiness Model distinguished among 3 kinds of influences: inherent genetic predispositions, current life circumstances, and current intentional activities.

According to the study, 50% of our happiness is effected by genes and only about 10% by life circumstances (accidents, winning a lottery etc).  The rest 40% is effected by our actions, intentions and habits and unlike the other two parts, that part is under our control. 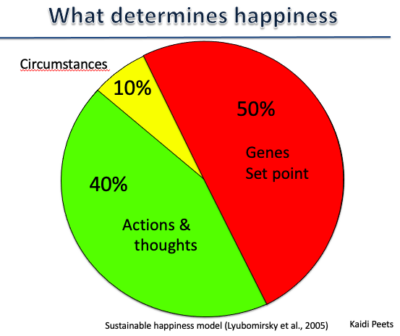 This more recent research affirms that people can affect their own happiness, via their deliberate efforts. However, these effects tend to be smaller than they initially believed. 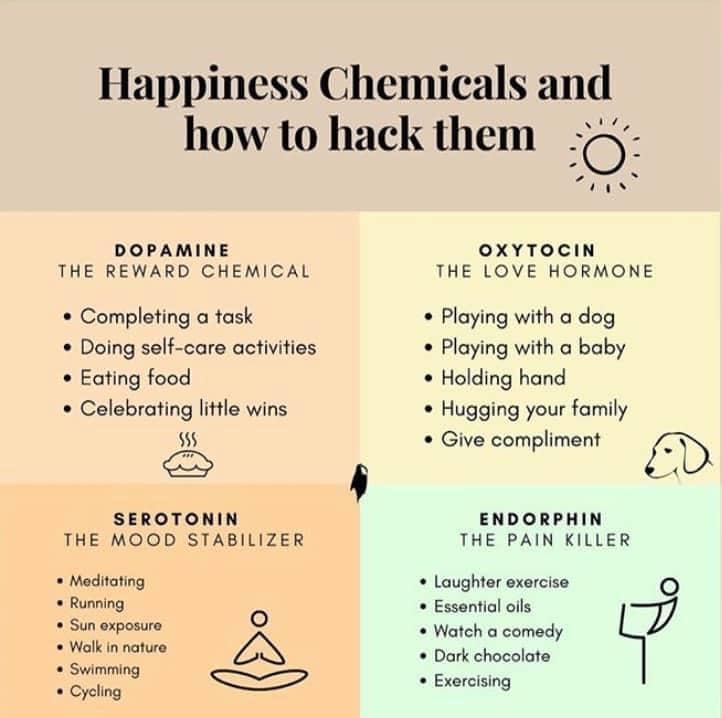 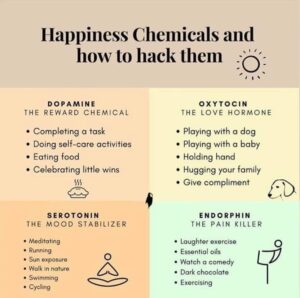